Before sunrise one day last week, the conductor Dalia Stasevska was deep in concentration in a Helsinki studio, ruminating on phrasing and transitions as she studied the score of Tchaikovsky’s Violin Concerto. Then, at 10 a.m., she put away her music and set out on a mission.

Stasevska, 38, a Kyiv-born musician who lives in Finland, drove across Helsinki in search of power generators to send to Ukraine, where millions of people, including her friends and relatives, have faced electricity shortages because of Russia’s continuing attacks. Later, she visited a factory in central Finland to inspect hundreds of stoves that she plans to send to families hit hard by the war.

“We can’t look away or get tired, because the war machine does not get tired,” she said in a video interview after the factory visit. “We have to be in this together and do everything we can for Ukraine.”

Since the start of the war last year, Stasevska, a rising young conductor, has been navigating the roles of artist and activist.

As the principal guest conductor of the BBC Symphony Orchestra in Britain and the chief conductor of the Lahti Symphony Orchestra in Finland, she maintains a busy concert schedule and makes frequent appearances in the United States. Starting Friday, she will lead the New York Philharmonic in a series of concerts featuring the violinist Lisa Batiashvili in the Tchaikovsky concerto.

In between rehearsals and concerts, she devotes herself to promoting the cause of Ukraine. She said she has raised more than 200,000 euros (about $216,000) since the start of the invasion and has driven trucks loaded with supplies into the country. She is also a prolific commenter on social media, calling on Western governments to provide more weapons to Ukraine and denouncing Russia as a “terrorist state.” 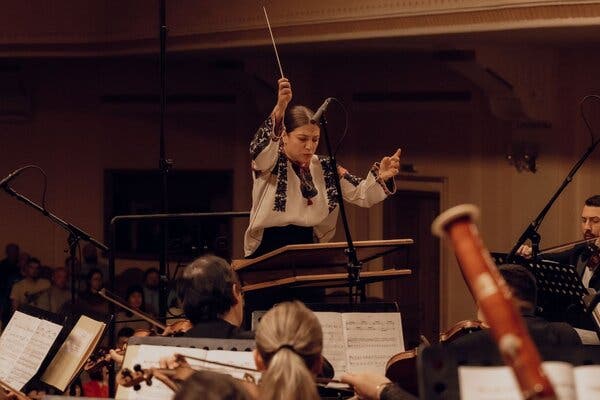 Stasevska conducing a concert of Ukrainian music in fall. Eager to bring a “moment of normality to a country where nothing is normal,” she said, she traveled to the city to deliver supplies and to conduct.Credit…via Unison Media

Stasevska said that her aim was to continue to shine light on the suffering in Ukraine and to help bring an end to the war.

“I can’t save Ukraine by playing music, but I can use my mouth and speak out, and I can act,” she said. “We can’t just hide behind our virtues. There comes a time for action.”

Her colleagues say that Stasevska is eager to challenge the status quo both in the artistic realm and in life. Claire Chase, a prominent flutist and educator, described her as a “supernova,” praising her collaborative and commanding style.

“She is courageous on and off the podium,” Chase said, “the kind of person who will, under any circumstances, speak her mind, and I just have so much admiration for her.”

Stasevska, the daughter of painters, grew up in Estonia and Finland, where her mother is from. But her relatives also nurtured her connection to Ukraine, her father’s home country. She learned Ukrainian, practiced folk songs and studied the country’s poetry, history and literature with her father and grandmother.

She recalled being teased in school for her Ukrainian surname, but always felt proud of her identity.

“Ukraine was always this beautiful place in my mind,” she said. “The way my family spoke of it, the apples were much bigger there than anywhere else in the world. It was this dream country filled with possibility, and with wonderful people.”

When Stasevska was 8, her parents gave her a violin, telling her she could make a profession out of playing an instrument. But, she said, she didn’t feel emotional about music until she was 12, when a school librarian lent her a recording of Puccini’s “Madama Butterfly.” She had never heard an orchestra before, and was amazed by the power and drama of the score.

Stasevska near the Ukrainian Institute of America on the Upper East Side. She leads a series of concerts in New York, beginning Friday.Credit…Lanna Apisukh for The New York Times

She set out to become a professional orchestra musician. As a teenager in her bedroom, she played along as she blasted Beethoven symphony recordings by giants like the conductor Herbert von Karajan.

Then, when she was 20, she began to see another path. She was inspired after she saw a concert led by the conductor Eva Ollikainen; she had never seen a woman conduct before.

“I saw a role model and someone who looked like me,” she said. “Suddenly I was thinking: ‘Wait a minute, I’m interested in scores, I love orchestra music. Why can’t I try this?’”

She sought out the eminent Finnish conducting teacher Jorma Panula, cornering him in an elevator to ask if she could study with him. (Finland has produced a prodigious number of world-class conductors, and Panula has mentored many of them, including Esa-Pekka Salonen and Susanna Mälkki.) He pulled a receipt from his pocket, and wrote a phone number for her to contact the organizer of an upcoming master class.

After graduating in 2012 from the Sibelius Academy, the storied conservatory in Helsinki, Stasevska began a steady rise, starting as an assistant to Paavo Järvi at the Orchestre de Paris. In 2019, she was appointed to her post at the BBC Symphony, and in 2020, she was selected to lead the Lahti Symphony.

She made a memorable debut with the New York Philharmonic in 2021, leading a program that included works by Missy Mazzoli, Anthony Davis and John Adams. Seth Colter Walls, reviewing that performance in The New York Times, described her conducting as “powerful but never overly brash.”

When the invasion began, Stasevska was devastated, concerned for the safety of her friends and family. Her brother was living in Kyiv and studying to be a movie director. She struggled to focus on music and resolved to cancel an appearance in March with the Seattle Symphony and take a break from conducting. But she changed her mind, she said, deciding she could use her platform to oppose the war.

During the concert in Seattle, she made a speech about the war and led a performance of the Ukrainian national anthem. At one point during a loud passage of Dvorak’s “New World” Symphony, she said she let out a scream from the podium.

“It was some kind of prehistoric need for me to yell,” she said. “It was horrible being in this situation where you don’t know if your brother will be alive the next morning.”

Working with her two brothers, as well as the Ukrainian Association in Finland, she began soliciting donations to buy supplies. They have gathered contributions from thousands of people and have purchased generators, stoves, clothes, sleeping bags, vehicles and other items.

In the fall, eager to bring a “moment of normality to a country where nothing is normal,” she traveled to Lviv to deliver supplies and to lead a concert of Ukrainian music. She said it was important for Ukraine to promote its culture as a way of opposing Russia, citing the example of Sibelius, whose Second Symphony is on the Philharmonic program this week, and whose works around 1900 were often interpreted as yearnings for liberation from Czar Nicholas II. (She is married to the Finnish bass guitarist Lauri Porra, a great-grandson of Sibelius.)

“When a country is fighting for its freedom and harmony,” she said, “cultural identity is essential.”

As Stasevska’s profile rises, she has been mentioned as a contender for a music director position in the United States. And, she said, she’s interested.

Deborah Borda, the New York Philharmonic’s president and chief executive, called her a “dynamic podium presence demonstrating a welcome combination of power and warmth, but with no compromise.” She praised her debut with the Philharmonic, noting that she was able to pull it off with only one rehearsal in the hall, on the day of the concert.

“That took courage, equanimity, flexibility and pure technique,” Borda said. “She is a prime example of today’s ‘ready for action’ rising women conductors.”

As the fighting continues in Ukraine, music has offered Stasevska an escape, she said in an interview this week in New York. Still, she said she sometimes finds it difficult to perform works by Russian composers, including Tchaikovsky. She copes by reminding herself that the composers she admires are not responsible for the war.

“I really have hope; I know that Ukraine will win one way or the other,” she said. “We just have to be human in this moment and do the right thing.”

Tags
She She Said Ukraine Was With