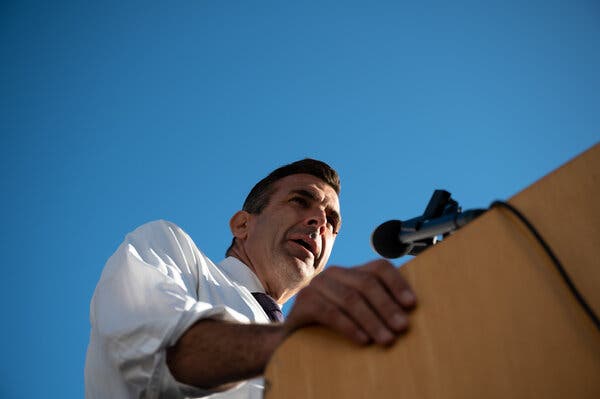 As the new year began, California’s third-biggest city got a new mayor.

Matt Mahan took the helm in San Jose on Jan. 1, vowing to curb homelessness, reduce crime and make the city more affordable. The former San Jose councilman won the mayoral election in November with 51.3 percent of the vote and succeeded Sam Liccardo, who couldn’t run again because of term limits.

Liccardo, 52, is also a former city councilman and led the Bay Area city for eight years — through a pandemic, a mass shooting, a homelessness crisis, a horrific flood and more. Just before Liccardo left office, I spoke to him about the city’s housing shortage, his proudest moments and what’s next for him.

Here’s our conversation, lightly edited for clarity and length:

What are you proudest of from your years as mayor?

I think a lot about the next generation and what we’ve been able to do to invest in first-generation college students and young adults. To give you one example: SJ Aspires — we’re using a digital platform to help guide first-generation students on the path to college, and we provide micro-scholarships to reduce financial barriers to college. We completely eliminated the digital divide for low-income students by providing free broadband to more than 150,000 residents. A program we launched called the Resilience Corps is helping hundreds of low-income young adults make their way into the work force through work that dramatically improves our communities’ resilience to climate change and the pandemic and other challenges we face

Frankly, as we look at what we’ve left our next generation, they have a lot of reason to be pretty upset with us, whether it’s climate change or billions of dollars of unfunded liabilities in pension obligations, or a whole host of other things. It seems to me that it’s the investment that we make in their future that’s going to be our greatest legacy.

I think, for every big city in the western United States, this is enormously daunting. And there are much bigger forces at work here than those within City Hall. The two largest forces appear to be supply and demand. What we know from the data is that lots of high-poverty cities don’t have a lot of homelessness. But really expensive cities like San Jose and San Francisco and L.A. have horrific levels of homelessness. So that should tell us something about the extent to which the supply and demand of affordable housing has a really large role here.

Fundamentally, for cities, the task has to be how do we dramatically expand that inventory of accessible housing. And that’s a bigger problem than any one city can solve alone. There’s no question we need a much larger role for the state and the federal government to embrace this as a national crisis if we’re really going to tackle it.

Do you see homelessness as your successor’s biggest challenge?

Yes, that’s the largest crisis for every big city in the West. We’re not unique in that regard. The challenge of our generation is this growing economic divide, and homelessness is one very severe symptom of that growing divide. That divide is driven by very large forces — globalization of technology, of automation. We can all see that more and more of our residents are being left behind in an economy that does not value the same skills as it did 30 years ago, and as a result more will struggle unless we can dramatically accelerate our investments in people. So I think that is going to be the generational challenge for our city, and for every tech-heavy city in the country.

What would you say your most difficult moment as mayor was?

As mayor, you have a lot of experiences with residents in their deepest moments of pain. I think particularly about the time we were at the Red Cross center talking to family members of V.T.A. employees who were slain in the mass shooting in May 2020. The coroner could not confirm the identity of the victims. We sat there for hours with families who were not being told that their husband or son had been lost. That was an intensely painful moment.

You haven’t announced what’s next for you. What will you be doing after you step down?

I’m going to duck that question. My wife and I committed that we’d get away and take some time and make some decisions after I’m out of office. I haven’t really had the time to focus on it.

Drainage from recent storms running into the ocean at Santa Monica State Beach this week in Los Angeles.Credit…Mette Lampcov for The New York Times

Why California is washing its water out to sea.

What does it take to bring a 1974 California cabin back to life?

An updated version of pasta alla Norma with fried prosciutto.

Palm Springs made the Times list of 52 places to travel to in 2023.

A new book about corruption and reform within the Oakland police department — with implications for all of us.

The Times asked readers for the best advice they received, or gave, in 2022. What did they find themselves repeating — to themselves and others?

The responses flooded in, and we’re sharing 20 of the wisest and most witty. Here are some of my favorites:

“You cannot learn anything when you are talking.” — Linda Zimmerman, Austin, Texas

“Walk toward the monster (the pain, the scary thing, the grief).” — Valerie Rosenfield, Oakland

“When trying to go off to sleep at night, instead of counting sheep, try counting your blessings. It can often help.” — Tom Barnes, London

Thanks for reading. I’ll be back on Tuesday. — Soumya

Briana Scalia and Shivani Gonzalez contributed to California Today. You can reach the team at CAtoday@nytimes.com.

Tags
City New That Time What