Good morning. It’s Tuesday. Today we’ll see what a foundation in Brooklyn is doing to help nonprofits in a borough that it says is too often overlooked. We’ll also get details on some city investigators responsible for cracking down on jail officers suspected of lying about being sick. The investigators have themselves been absent from work for significant periods. 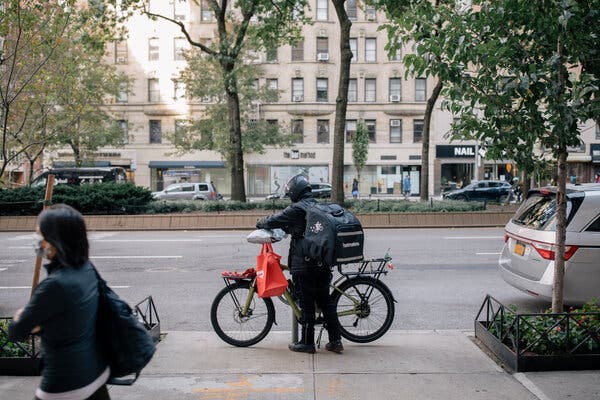 Credit…Jose A. Alvarado Jr. for The New York Times

The consciously Brooklyn-centric Brooklyn Community Foundation says that the borough is home to nonprofits that are often overlooked by the city’s philanthropic sector. “We know by the data that Brooklyn nonprofits do not get their share of funding,” said Jocelynne Rainey, the president and chief executive of the foundation.

The data says that Brooklyn is home to just under 30 percent of the nonprofits in the city, but its share of philanthropic giving is only 7.6 percent.

Brooklyn is “a borough full of wealth but also a lot of people living on the margins,” Rainey said.

The foundation is addressing the funding gap by giving $100,000 grants to five nonprofits as winners of its annual Spark Prize. “We are leveling the playing field for the most vulnerable New Yorkers,” Rainey said.

One of the five winners is the Workers Justice Project, which established the collective Los Deliveristas Unidos to campaign for higher wages and better working conditions for delivery workers.

Ligia Guallpa, the executive director of the Workers Justice Project, said the money would go toward a $1.7 million delivery hub headquarters in Williamsburg with a charging station and a bicycle repair shop for deliverers, as well as space for work force development and workers’ rights training. She said the group had raised $1.5 million so far, including the $100,000 from the Spark Prize.

The delivery hub headquarters will dovetail with plans to turn existing structures like vacant newsstands around the city into rest stops for delivery workers.

Guallpa said the recognition “adds to the plus of the money.” Another plus, she said, is that the money will come with no strings attached.

“All of our grant making is unrestricted dollars,” Rainey said. “Every grant is given to an organization for them to do what they dream about doing — pay somebody, bring on another staff member, do programming that is really impactful, keep the lights on if they need money for that, pay the rent.”

For the Workers Justice Project and the four other groups chosen as Spark Prize winners, $100,000 “can really help move the needle,” she said, especially when inflation has driven up the cost of supplies, including food and medicine for nonprofits that provide them.

“It’s a time when people think Covid is over and the needs are no longer there,” she said. But unemployment in New York City, which has remained above the national jobless rate, remains a concern for many, as does food insecurity, she said.

The criteria for Spark Prize applicants include Brooklyn roots, at least five years of operation and annual budgets of more than $250,000. The grants will be presented at a breakfast in March that will also honor Jennifer Jones Austin, who was the chairwoman of the city’s Racial Justice Commission. That panel drafted ballot measures that voters approved in November calling for the city to “reconstruct, revise and reimagine” institutions and laws to promote justice and equity.

Guallpa said word of the prize came at the right moment. She was getting coffee before a meeting 10 days ago — “one of those beginning-of-the-year meetings” where the agenda is the agenda, she said. Her cellphone rang, and suddenly she had big news to announce.

“A lot of the deliveristas were not surprised but were excited — ‘Wow, it’s exciting to see our organization being recognized and know we are doing the right thing,’” she said. “This is reaffirming our fight and acknowledges that we are building for the long term.”

Partly sunny, then chance of showers, with highs in the mid-40s.

Sick leave among investigators looking into abuses of sick leave

It is another hall-of-mirrors story about Rikers Island: Some investigators have called in sick unusually often while investigating Rikers Island correction officers suspected of sick-leave fraud.

Records show that three investigators took more than 15 sick days last year, mostly on Mondays or Fridays or around holidays.

One investigator repeatedly called in sick while traveling out of state, according to records and someone who was familiar with the matter but was not authorized to speak publicly.

Jocelyn Stauber, the Investigation Department commissioner, said in a statement that improvements are in the works to monitor sick leave taken by correction officers assigned to her agency. She said that “any inquiry of potential misconduct by our staff is of great concern,” though she added that a preliminary review following an inquiry from The New York Times did not indicate widespread sick-leave abuse “of a kind that will meaningfully compromise our investigative work.”

Louis Molina, the Correction Department commissioner, said that abuses of sick time, including abuses by staff members assigned to the Department of Investigation, would not be tolerated. The union representing correction officers did not respond to requests for comment.

As violence soared at Rikers and the death toll climbed in the last couple of years — last year 19 people died in city jails or hospitals shortly after becoming sick or sustaining injuries in jail — the Department of Investigation began working on dozens of possible sick-time abuse cases, which can result in administrative action or criminal charges. The correction officers under investigation were assigned to a unit within the agency known as Squad 1.

Interviews with people familiar with these inquiries and internal records show that there are few measures in place to hold investigators accountable for abuses of sick time. Correction staff assigned to the Department of Investigation who are considered “chronic sick” — having called out sick on 12 or more days in one year — are not routinely subject to home visits, as others in the department are.

A Times review of personnel records identified nine members of Squad 1 who could have qualified as “chronic sick.” It was unclear which two were under investigation, and the department declined to identify them, citing restrictions on the disclosure of investigations and medical information.

I had just left an exercise class for pregnant women at 86th Street and Broadway. I was in my eighth month and wearing one of the few things that still fit: a big purple jumpsuit and the comfortable purple shoes I loved to wear with it.

Running to catch a bus, I tripped on the curb, twisted my ankle and landed flat on my back in the middle of Broadway.

Groaning and bent over in pain, I noticed that traffic had stopped and that a small crowd was forming around me.

At some point, a kind woman drove by, helped me into her car and drove me to the hospital. Someone notified my husband that I was there. He left work, rushed to the hospital and, thinking that I was giving birth, headed straight for the maternity ward.

When he couldn’t find me anywhere on that floor, an intern finally cleared up the confusion.

“Oh, are you looking for that purple pregnant lady?” he said. “She’s downstairs in the ER.”

Melissa Guerrero and Ed Shanahan contributed to New York Today. You can reach the team at nytoday@nytimes.com.

Tags
Said That Was With Work