MEMPHIS — Memphis had already been on edge. Just days earlier, a kindergarten teacher had been abducted on an early morning jog in the city and was later found dead.

But on Wednesday, the city felt paralyzed. That night, a gunman set off a frenzied manhunt with a string of shootings that left a trail of bloodshed across Memphis, killing four people, wounding three others and causing widespread alarm until he was cornered by the police and taken into custody.

Now, the day after the rampage, fear had settled into fury, stoking a renewed sense of anger and concern over violence in Memphis.

“I’m angry that our citizens had to shelter in place for their own safety until the suspect was caught,” Jim Strickland, the mayor of Memphis, said in a news conference on Thursday. “This is no way for us to live, and it is not acceptable.”

Memphis has long struggled with chronic poverty and crime and is often ranked among the nation’s most violent cities. Its troubles have intensified in recent years. In 2021, the city had a record number of killings, with 346. In 2022, the violent crime rate compared with last year’s has only marginally improved, according to police statistics.

The recent violence has inflamed tensions over crime and policing, prompting calls for bolstering the city’s police force. It has also stirred broader fears about how violence and crime are undermining the city’s development.

Police officials said the violence had started after midnight on Wednesday, when a gunman shot and killed a 24-year-old man in a driveway. But the most intense period started after 4 p.m., when the Memphis police reported two shootings by the same gunman in nearby locations. In one, a man was found fatally shot in his car, the police said, and at the other, a woman had been shot in the leg. 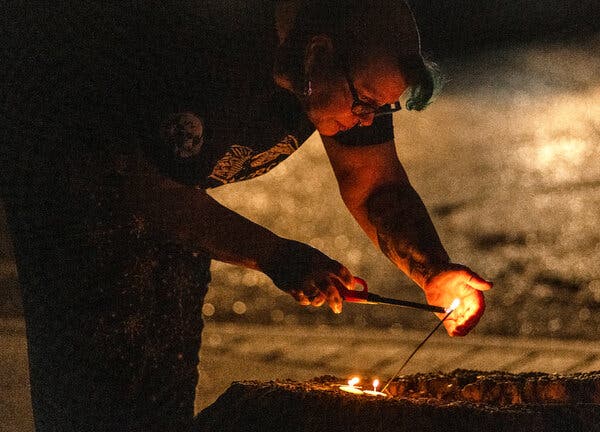 A vigil for one of the people killed in a shooting rampage Wednesday in Memphis.Credit…Houston Cofield for The New York Times

More than an hour later, the police said, the gunman, identified by the authorities as Ezekiel Kelly — who was then streaming live on Facebook — charged into an auto-parts store and opened fire, critically wounding one man there. The gunman then fatally shot a woman during a carjacking. After that, he fatally shot another woman and wounded a man, the police said. The gunman then stole another vehicle at gunpoint in Southaven, a Memphis suburb just over the state line in Mississippi.

The police then pursued Mr. Kelly in a high-speed chase that led him back into Memphis, where he was arrested shortly after 9 p.m., officials said.

“This has been a horrific week for the city of Memphis and the Memphis Police Department,” the police chief, Cerelyn Davis, said during a news conference in which she detailed the harrowing chain of events on Wednesday.

Chief Davis also noted the anguish still rippling through Memphis after the killing of Eliza Fletcher, the 34-year-old teacher and mother of two who had been abducted. Ms. Fletcher had last been seen on Sept. 2.

She had been out jogging near the campus of the University of Memphis, near the heart of the city; the authorities said that she had been forced into an S.U.V. Days later, her body was found behind a vacant duplex apartment in South Memphis, about seven miles from where she had been taken, the police said.

In that case, one man, Cleotha Abston, 38, was charged with first-degree murder, as well as with kidnapping-related offenses.

“Our city is hurting,” Karen D. Camper, a state lawmaker representing Memphis, said in a statement.

“There is a long road ahead and much work ahead for us to do in order to begin to heal our city,” said Ms. Camper, the Democratic leader in the State House of Representatives. “And we will have those policy discussions.”

The violence has invigorated debates over residency rules for the Police Department, with some pushing for them to be loosened considering the vacancies on the force. Others also expressed outrage over Mr. Kelly’s release from prison earlier this year.

Mr. Kelly, 19, had been charged in 2020 with attempted first-degree murder, possession of a firearm and reckless endangerment with a deadly weapon. Mayor Strickland said Mr. Kelly had been sentenced to three years in prison after pleading guilty to a lesser charge, aggravated assault, but had been released in March after serving 11 months.

In a post on Twitter, Mr. Carlisle said that he had seen and heard lots of chatter from people saying the time had come to leave the city, that their angst and anger over the city’s climate were nearing a breaking point. “I’ll never tell anyone how to feel,” he wrote. “But I want you to stay.”

He said that Memphis was not alone, as other American cities also wrestle with increases in crime. In 2020, Memphis was one of several cities — along with Kansas City, Mo.; Cleveland; and Detroit — chosen by the administration of former President Donald J. Trump for infusions of federal law enforcement officers.

Still, Mr. Carlisle acknowledged the gravity of what his city was confronting. The turmoil over crime was especially clear as the rampage unfolded on Wednesday night, as he saw the alerts and was bombarded by text messages from scared residents.

Memphis police officers at the location of one of the shootings.Credit…Houston Cofield for The New York Times

During that time, the Memphis Area Transit Authority halted bus and trolley service. The University of Memphis locked down its campus. The Memphis Police Department blasted out urgent bulletins on social media: “If you do not have to be out, stay indoors until this is resolved.”

As he wrangled carts outside a supermarket, Terry Taliaferro, 60, said the Wednesday night violence that had pinged across the Memphis area didn’t make sense — no rhyme and certainly no reason. “Used to be there were bad neighborhoods you stayed out of,” he said.

“I don’t understand it,” Mr. Taliaferro added. “He was just shooting people.”

Lawrence Matthews was at home in his garage working on set pieces for an upcoming music performance when he got a text from a friend about the gunman. His first thought: Get some takeout for dinner before the roads got too crowded with police personnel.

“I was disturbed, but I was like, this is always happening,” Mr. Matthews said, noting on Wednesday that white and more affluent areas of the city were just seeing the kind of threat that he believed was much more common in poorer neighborhoods that had not received the same level of concern. “The only difference is it’s happening in Midtown.”

“I was disturbed, but I was like, this is always happening,” Lawrence Matthews said of the shooting spree.Credit…Whitten Sabbatini for The New York Times

“These symptoms of poverty that is Memphis-wide that they choose to ignore,” he added, “are now creeping into their area and the places that they do champion.”

But as much as he worried about apathy and that residents would give up on the city, Mr. Carlisle, the city councilman, also maintained his optimism. Memphis had weathered a lot. He knew the city’s resilience.

“Memphis will endure,” Mr. Carlisle said, and so, too, will many of the residents who remain invested in building up the city. “We’re not going anywhere,” he said. “Memphis is home.”

Laura Faith Kebede is a reporter at the Institute for Public Service Reporting at the University of Memphis.

How Is Everyone Making Those A.I. Selfies?

Is Aaron Judge the Next Yankees Captain?