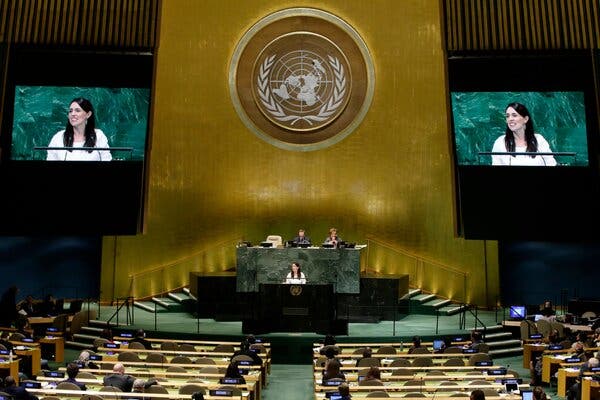 Jacinda Ardern, the New Zealand prime minister, shocked nearly everyone by announcing this week that she would resign. The reason was simple, she said: She was simply too worn out to continue.

“I believe that leading a country is the most privileged job anyone could ever have, but also one of the more challenging,” Ardern said in an emotional resignation speech. “You cannot and should not do it unless you have a full tank plus a bit in reserve for those unexpected challenges.”

“I know there will be much discussion in the aftermath of this decision as to what the so-called ‘real’ reason was,” she said. “The only interesting angle you will find is that, after going on six years of some big challenges, I am human. Politicians are human. We give all that we can, for as long as we can, and then it’s time. And for me it’s time.”

That did not stop commentators from pointing to her falling approval ratings as a possible alternative explanation: Her party is plunging in the polls, in part because of voter frustration over inflation and other economic issues. Leaving now means leaving on her terms, rather than waiting to see if she will get forced out in the next election.

Watching her speech I was struck by how Ardern has had to navigate the complicated gendered expectations that often create barriers to women’s success.

Women are often expected to be unfailingly kind and patient, and to nurture those around them. If women demonstrate the type of leadership typically praised in men — ambitious, swaggering, domineering — they are seen as unfeminine, unlikable, and even illegitimate leaders. To understand how that plays out in practice, take a look at the scholarship of Victoria L. Brescoll, a professor at Yale who studies how biased perceptions of women undermine their success on the individual level and reinforce gender gaps more broadly in society.

Ardern, as I wrote in this 2020 column,built a public image that tied her leadership to traits that women are usually praised for. For instance, when Ardern addressed the nation after the country began its strict Covid lockdown in March 2020, she conducted an informal Facebook Live session on her phone while wearing a cozy sweatshirt, and made sure to let people know that she had just finished putting her toddler to bed. By portraying herself as maternal, friendly, and cooperative, she remained extremely popular even as she locked down the country.

Ardern’s tenure, and particularly her handling of the pandemic, showed how those stereotypically feminine traits could be valuable in leaders. “What we learned with Covid is that, actually, a different kind of leader can be very beneficial,” Alice Evans, a lecturer at King’s College London, who studies how women gain power in public life, told me for that 2020 article. “Perhaps people will learn to recognize and value risk-averse, caring and thoughtful leaders.”

That’s not to say, of course, that Ardern never experienced sexist criticism or abuse. Just hours into her first term as prime minister, an interviewer asked her whether she had chosen her career over motherhood, for instance. After she gave birth to her daughter while in office — the first leader to do so in nearly 30 years — she was criticized for taking just six weeks’ maternity leave. New Zealand’s police have recorded escalating numbers of violent threats against her in recent years, including rape and death threats.

Kate Manne, a philosophy professor at Cornell University, argued in her 2018 book “Down Girl: The Logic of Misogyny,” that because women are seen as constantly in moral debt — owing men care, attention, time and sexual pleasure — they are often punished for saying ‘no’ to others’ demands.

Female athletes like Naomi Osaka and Simone Biles faced an angry backlash after they refused to compete under conditions they found unsafe, for example, as I discussed in my 2021 newsletter, “The Sport of the Summer is the Women’s Freestyle ‘No.’”

Ardern’s resignation speech suggested that she was balancing the “no” of her resignation with other priorities of her own choosing.

“Neve, Mum is looking forward to being there when you start school this year,” she said to her daughter.

“Clarke,” she said to her partner, “Let’s finally get married.”

Thank you for being a subscriber

Read past editions of the newsletter here.

If you’re enjoying what you’re reading, please consider recommending it to others. They can sign up here. Browse all of our subscriber-only newsletters here.

I’d love your feedback on this newsletter. Please email thoughts and suggestions to interpreter@nytimes.com. You can also follow me on Twitter.

Tags
Ardern New She That Was