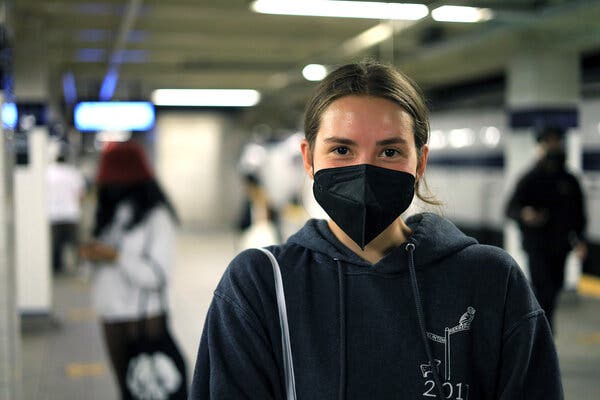 Just for once, Cecily Vlack, wasn’t wearing a mask in the subway. She hoped no one would notice. But of course I walked by, a reporter looking to talk about the subway mask mandate that, at that moment, was still in effect — although Gov. Kathy Hochul was about to lift it.

“It honestly doesn’t do that much, because everyone already in the past eight months has really stopped wearing masks in a lot of places,” Vlack, above, who is 18 and was on her way to a driving lesson in preparation for college in subwayless Oregon, told me.

And the subway is one of those places. I took a half dozen subways, starting at about the time Hochul declared masks were now “encouraged, but optional” — and I did some counting. On a C train from the Jay Street station in Brooklyn, 14 of the 51 people in the car I was in had masks on — 27 percent, about the same as on a later A train and less than half the 64 percent compliance rate cited by the Metropolitan Transportation Authority for April, the most recent month for which statistics are available.

On a sparsely filled E train I caught at Spring Street, three of the six people in the car I stepped into were masked. Later, on an uptown C train from 59th Street, I counted six mask wearers among the 14 passengers.

Like Todd Hanshaw, a consultant to fashion retailers and designers, many passengers went maskless on the platform but slipped on face coverings as they stepped into the relatively confined space of the next train that came along.

“Not out here,” Hanshaw said on the platform at West Fourth Street. But he said he was vaccinated and had received two boosters. “Time to move forward,” he said, “so I’m fine” with scrapping the mask requirement.

“But you have to take care of yourself,” he said as an A train pulled in and he put on a mask.

That echoed a point Hochul made. “You’ll do your own personal risk assessment of who you’re exposed to, your own vulnerabilities, where you work,” she said. “You make your own determination.” She also pleaded for a live-and-let-live approach: “Do not judge your fellow passengers on what their choices are,” she said.

Continuing a mask requirement had become more difficult when so many passengers were choosing to flout it. Janno Lieber, the chairman and chief executive of the transit agency, said that justifying and enforcing it had become problematic, when “so much of the city and so many other places were opening up — bars, restaurants, offices.”

And cabs and ride-share vehicles, like those from Uber and Lyft. The city’s Taxi and Limousine Commission loosened its mask requirements after Hochul’s announcement. Mask requirements in homeless shelters are also being dropped, but they will continue in health care facilities such as hospitals and nursing homes.

“We have to restore some normalcy to our lives,” Hochul said. But in the subway, some riders remained apprehensive — even if they did not have masks on.

Donna Johnson, a global logistics consultant, had isolated herself on a downtown B train, putting a large carryall bag on the seat beside her. I felt that I was almost crowding her when I sat on the third center-facing seat.

Johnson, looking up from the brand-new novel she was reading, acknowledged that she was not wearing a mask at that moment. But she said that people should. “That’s why I sit by myself, away from everyone,” she said.

So where was her mask? In her bag, she said. She had slipped it off after she had trouble breathing on the way down the steps to the platform. “Allergies,” she explained. “You take it off for a moment and then put it back on. As soon as I cross over to the next train, I’ll put it back on.”

Expect a mostly sunny day, with temperatures near the high 70s. For tonight, it’s mostly clear, with temps around the mid-60s.

In effect until Sept. 26 (Rosh Hashana).

New charges against Stephen Bannon, the former chief strategist for former President Donald Trump, are expected to become known today. My colleague Rebecca Davis O’Brien reports that Bannon is expected to surrender to face state charges in New York involving a fund-raising operation created to spur on Trump’s promise of a border wall with Mexico.

The indictment against Bannon is sealed, leaving the precise allegations unclear on Wednesday. But Bannon issued a statement calling them “phony.”

“This is nothing more than a partisan political weaponization of the criminal justice system,” he said in the statement. A spokeswoman for Alvin Bragg, the Manhattan district attorney, declined to comment.

Bannon and three others were arrested in the summer of 2020 on federal charges that involved allegations that they cheated donors to the wall project, which was known as We Build the Wall and was promoted in Instagram and Twitter posts that mentioned ties to Trump. We Build the Wall raised more than $25 million in contributions. Federal prosecutors said Bannon had used nearly $1 million of the money for personal expenses.

Bannon never went to trial — Trump pardoned him hours before leaving office in January 2021. But the pardon covered only federal charges. The Manhattan district attorney’s office, headed at the time by Cyrus Vance Jr., began its own separate investigation. The new indictment was first reported by The Washington Post.

Two of the others arrested with him, Brian Kolfage and Andrew Badolato, pleaded guilty in April to wire fraud conspiracy. Kolfage, an Air Force veteran who lost both legs and part of one arm in Iraq, also pleaded guilty to tax-related charges.

The third person arrested with them, Timothy Shea, went on trial in May on wire-fraud and money-laundering conspiracy charges, along with an additional charge of falsifying records. Judge Analisa Torres declared a mistrial in Federal District Court in Manhattan in June after 11 jurors sent her a note saying that the 12th juror had refused to deliberate based on evidence and had referred to a “government witch hunt.”

Although Bannon was not on trial with Shea, he loomed over the case. Evidence showed that he was in contact with the others as they worked to direct funds to Kolfage.

It was one of those June evenings when it was still light out at nearly 9 p.m.

Returning to my West Village apartment building, I unlocked the front door and almost bumped into a neighbor who was standing in the entryway with a package in his hands.

We exchanged hellos, and he told me the package had been delivered to our building by mistake. He held it out, and I saw that the address was close to ours but had a few different numbers.

“I’m going to walk over there, ring the buzzer and drop it off,” my neighbor said.

“Why not catch the delivery person next time they come around and return it to them?” I asked.

“It’s beautiful outside,” he said. “I could use a little walk, and whoever this is supposed to go to might really appreciate it.”

This time, I hesitated.

“Who knows,” my neighbor continued. “It might make their night. Or mine.”

Melissa Guerrero, Francis Mateo and Ed Shanahan contributed to New York Today. You can reach the team at nytoday@nytimes.com.