KYIV REGION, Ukraine — The sharp crack of sniper fire rang out across the snowbound valley. Soldiers in white camouflage crouched low, shooting at the hill opposite to provide cover as four men evacuated a casualty.

The action was part of a live-fire training exercise for new recruits on a recent morning outside the Ukrainian capital, Kyiv. But there was an unusual element to the event. While a Ukrainian Army officer was giving the orders, the trainees were members of a volunteer Chechen battalion that also mixed in some Crimean Tatars and Ukrainians.

Ukraine’s military commanders have long said they do not lack soldiers for the war, but they have nonetheless welcomed to their ranks thousands of volunteers, including foreign citizens. Many of them, like the Chechens, are refugees from Russia itself. Others have come from surrounding nations, like Georgia, that have a history of opposition to Moscow and the leadership of President Vladimir V. Putin.

“We saw what was happening,” said Muslim Madiyev, a gray-bearded deputy commander of the Chechen battalion, wearing ear protectors to muffle the sound of gunfire as he watched the training exercises. “Ukraine has no shortage of men, but we have to join and be a part of this war.”

Many of the volunteers were already living in Ukraine, either for work or seeking refuge from political oppression back home. Some volunteers have struggled with visas and residency permits, while their eagerness to join the fight has aroused suspicions among some Ukrainian officials and commanders, who are on high alert for saboteurs. 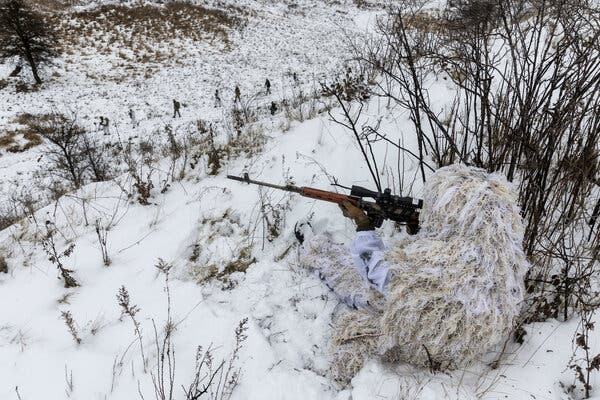 A sniper in winter camouflage during a training exercise for the volunteer Chechen battalion, a mix of Chechens, Tatars and Ukrainians.Credit…David Guttenfelder for The New York Times

Members of the Chechen battalion practicing the evacuation of a wounded soldier. Soon they will be doing this for real on the front line as they relieve regular Ukrainian units.Credit…David Guttenfelder for The New York Times

But the volunteers seem to be finding their place. Mr. Madiyev, a veteran of two wars in Chechnya against Moscow, was an associate of Dzhokhar Dudayev, the former Soviet general who led Chechnya’s bid for independence from Russia in the 1990s. Exiled from Chechnya, Mr. Madiyev settled in Ukraine in 2016.

His battalion, named for the late Chechen leader, is one of several Chechen units that have joined Ukraine in its fight against Russia in recent years, following the 2014 uprising of Russian-backed separatists in eastern Ukraine and the annexation of Crimea. Mr. Madiyev declined to reveal how many active fighters he had, saying simply, “We have enough.”

He spoke about the Russian invasion the way many Ukrainians do, saying that if Moscow is not stopped in Ukraine, it will threaten many more countries of Europe.

But the younger fighters in his battalion take things further..

“Our aim is the liberation of the Chechen Republic of Ichkeria,” a Chechen fighter said, using the name of the erstwhile self-declared republic, “and to help all the nations who want it, to gain freedom.” In accordance with military protocol, he gave only his code name, Maga.

The Chechens are only one example of numerous ethnic-based battalions and regiments that have been forming in Ukraine since Russia’s invasion last February.

Fighters from Belarus have formed a regiment thousands strong. Other volunteers come from the Caucasus and Central Asia, as well as from ethnic minorities that have large populations in Russia: Chechens, Tatars and Turkic-speaking groups.

Members of a Ukrainian military unit that included Georgian volunteers in the Kherson region in October.Credit…Ivor Prickett for The New York Times
Almaz Kudabek, the leader of a volunteer battalion composed of Turkic-speaking ethnic groups from the Caucasus, Central Asia and Russia, at a base in the Zaporizhzhia region of Ukraine last month.Credit…David Guttenfelder for The New York Times

Most of them are motivated by historic grievances of dispossession and suppression by Moscow. Chechens and Tatars were among many groups that were decimated by forcible deportations under Stalin in the 1940s.

There is also a smattering of Russian exiles, among them Russian nationalists and neo-Nazis who are opposed to Mr. Putin. A thousands-strong regiment of Belarusians includes many opponents of the country’s president, Aleksandr G. Lukashenko.

Their participation in the war may be useful for Ukraine, but it is also a potentially explosive issue for the Kyiv government because most of them harbor long-term political ambitions to return home and overthrow the Russian and Belarusian governments. Ukrainian military officials declined to comment on their use of the volunteer groups, while a spokesman for the Ukrainian security service, the S.B.U., said it was not responsible for managing them.

But the volunteers themselves say that they are acting with the full knowledge and under the orders of the Ukrainian Army and intelligence services. Many of their operations are covert, including dangerous reconnaissance or sabotage missions behind Russian lines.

In response to an appeal by Ukraine’s president, Volodymyr Zelensky, early in the war, thousands of volunteers poured in from Western countries, including the United States and Britain. Most joined the International Legion, which has been recognized by the Ukrainian government and, to some extent, integrated into the Ukrainian Army.

At a news briefing last month, Ukraine’s defense minister, Oleksii Reznikov, said there were ideological and political benefits to having foreign soldiers fighting alongside Ukrainians in defense of European values.

Russian volunteers with the Ukrainian Bratstvo group returning from a nighttime operation behind enemy lines. They run the risk of harsh treatment if caught by Moscow’s forces.Credit…Ivor Prickett for The New York Times
Russian volunteer fighters preparing to go on a joint nighttime operation with the Ukrainian Bratstvo Battalion in November.Credit…Ivor Prickett for The New York Times

Foreign soldiers were also gaining valuable experience, he added: “The experience of the modern war here, the war of technologies, drone war and electronic warfare. So I think it’s a win-win exchange.”

But the volunteers from former Soviet republics are, in many ways, even more useful.

They have a linguistic advantage because most speak Russian, which is widely spoken in Ukraine, and sometimes Ukrainian, making coordination with the Ukrainian military easier. And some, like a group of Georgians in the Kavkaz Legion, have battlefield experience, having served with the NATO-led force in Afghanistan.

Their knowledge of Russia and Russians, and their hatred of Moscow, has made the volunteers good undercover operators for Kyiv. Some Ukrainian officials and lawmakers have even expressed support for their causes. In October, for example, the Ukrainian Parliament passed a motion recognizing the Chechen Republic of Ichkeria as a territory occupied by Russia.

But they also face substantial risks, given the nature of their work behind enemy lines. Not just Russian nationals, but virtually any undercover soldiers captured by Russian forces would be dealt with harshly.

One of the more recently formed volunteer battalions, Turan, is composed of Turkic-speaking ethnic groups from the Caucasus, Central Asia and Russia. It is led by a refugee from Kyrgyzstan, Almaz Kudabek, who had worked as a barber on American bases in his home country and in the Afghan city of Kandahar.

He says he has recruited Azerbaijanis, Tatars and Chinese Uyghurs to the group, and he talks passionately about the marginalization and oppression of Turkic-speaking minorities in Russia. He said that Moscow had unfairly drawn conscripts for the war predominantly from remote and poorer regions of Russia, including those populated by Turkic-speaking ethnic minorities, who have been killed in far greater numbers than ethnic Russians.

But Mr. Kudabek said members of his unit could turn that injustice to their advantage, infiltrating Russian-occupied territory on sabotage missions and even passing themselves off as Russian soldiers.

“We just want to fight Russians,” he said. “We know what they are.”

Despite their evident value to the Ukrainian military, the commanders of ethnic battalions complained of a lack of support from Kyiv. The Chechen battalion leader, Mr. Madiyev, said that beyond weapons and ammunition, the units have to provide for their own food, fuel and equipment.

The leader of a Russian regiment, a far-right nationalist who uses the code name White Rex, said he ran into multiple obstacles when he formed the unit shortly after the Russians invaded.

Although he and his fellow volunteers had lived in Ukraine for several years, they were initially met with suspicion from Ukrainians on edge about Russian saboteurs. “We were held at gunpoint,” he said. “We had many funny, and not so funny, encounters, but I was determined to have this regiment.”

But they have also found support among Ukrainians.

A Ukrainian volunteer group, Bratstvo, eventually helped the Russian regiment find a role for itself not so dissimilar from the other ethnic battalions, operating behind Russian lines and carrying out reconnaissance and sabotage missions for the Ukrainian Army.

Minutes before setting out on a night mission recently, White Rex said his aim had always been to find a way to return home to Russia. But he said the war had taught him that the way to return to Russia was to overthrow Mr. Putin and his government.

“The Russian Volunteer Corps marches in and destroys the current government — that’s the only way,” he said. “You cannot persuade a tyrant to leave, and any other force would be seen as invaders.”

A sniper’s target on the training range near Kyiv.Credit…David Guttenfelder for The New York Times

Tags
From Have Russia That War