LAGOS, Portugal — The Bam Bam Beach Bitcoin bar, on an uncrowded beach in southwestern Portugal, is the meeting place.

To get there, you drive past a boat harbor, oceanside hotels and apartment buildings, then park near a sleepy seafood restaurant and walk down a wooden path that cuts through a sand dune. Yellow Bitcoin flags blow in the wind. The conversations about cryptocurrencies and a decentralized future flow.

“People always doubt when to buy, when to sell,” said Didi Taihuttu, a Dutch investor who moved to town this summer and is one of Bam Bam’s owners. “We solve that by being all in.” 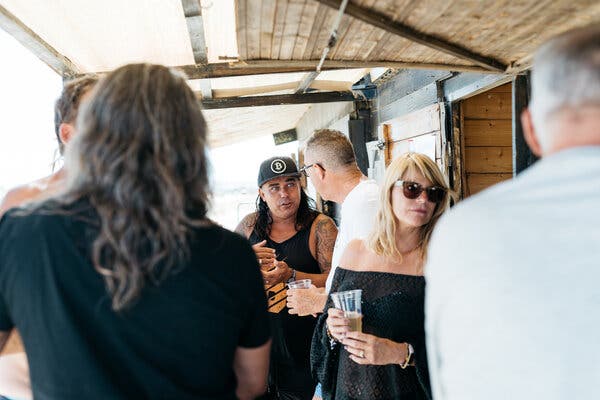 Didi Taihuttu, center, a co-owner of Bam Bam. He said he was still “all in” on crypto.Credit…Rodrigo Cardoso for The New York Times

Sitting in the sand nearby, another bar regular, Katherin Bestandig, said, “Everything is possible if you’re brave.”

The bar and community of about 150 crypto supporters around the town of Lagos are a bubble of optimism amid what has become known as the “crypto winter.” This summer, cryptocurrencies such as Bitcoin and Ether melted down, and crypto companies like the experimental bank Celsius Network declared bankruptcy as fears over the global economy yanked down values of the risky assets. Thousands of investors were hurt by the crash. The price of Bitcoin, which peaked at more than $68,000 last year, remains off by more than 70 percent.

But in this Portuguese seaside idyll, confidence in cryptocurrencies is undimmed. Every Friday, 20 or so visitors from Europe and beyond gather at Bam Bam to share their unwavering faith in digital currencies. Their buoyancy and cheer endure across Portugal and in other crypto hubs around the world, such as Puerto Rico and Cyprus.

An access point to Meia Praia, which has become known to some as Bitcoin Beach. It has become a bubble of optimism about cryptocurrency amid a serious downturn for crypto.Credit…Rodrigo Cardoso for The New York Times

“We do not sell,” Paulo Estevão, a crypto trader, said over lunch at a restaurant in the Portuguese beach town of Ericeira, where he meets weekly with three other friends who invest in cryptocurrencies. He said his crypto holdings were down about 80 percent from the peak but added, “I’m investing more.”

In Europe, Portugal has stood out as one of the largest hubs for crypto investors and enthusiasts. Many crypto supporters flocked to the country because the government does not tax profits made from the virtual currencies, unlike Italy and France. It helps that the weather is beautiful, the cost of living low and there is an easy path to residency. Vanguard Properties, a real estate company in Portugal, said it had sold at least 10 luxury homes to “crypto families” since last year. (The sales were previously reported by Sifted.eu.)

In beach towns like Ericeira and Lagos, shops and restaurants show their acceptance of digital currencies by taking Bitcoin as payment. Lisbon, the capital, has become a hub for crypto-related start-ups such as Utrust, a cryptocurrency payment platform, and Immunefi, a company that identifies security vulnerabilities in decentralized networks.

“Portugal should be the Silicon Valley of Bitcoin,” Mr. Taihuttu said. “It has all the ingredients.”

Yet the Portuguese government may throw a wrench in the country’s status as a crypto hub. In May, Fernando Medina, the finance minister, said the government was considering taxing crypto earnings like regular income and “intends to legislate on this matter.” A decision could come next month when Portugal releases its annual budget.

The finance ministry declined to comment on its plans.

For now, Portugal remains popular with the optimists and amateur traders who are trying to use their crypto investments to travel and live without a traditional job. Using money made when the values of digital currencies soared over the past few years, this group has made Portugal a base.

Many in Lagos, inspired by Mr. Taihuttu, 44, have made their way to Bam Bam bar. In 2017, he sold nearly all of his belongings in the Netherlands to invest in Bitcoin. At the time, the price of a single Bitcoin was about $900, versus about $19,000 today. With his wife and three daughters, who have not received any formal schooling since 2017, he then traveled to 40 countries, chronicling every step on social media. They called themselves “the Bitcoin Family.”

As news outlets covered his family’s story, Mr. Taihuttu’s social media following swelled, turning him into an influencer and a source of investment advice. A documentary film crew has followed him on and off for the past 18 months. This summer, he settled in Portugal and quickly became something of an ambassador for its crypto scene.

He has goals to turn Meia Praia, the beach where Bam Bam is located, into “Bitcoin Beach.” He is shopping for property to create a community nearby for fellow believers.

“You prove that it is possible to run some part of the world, even if it’s just one,” said Mr. Taihuttu, with a Jack Daniel’s and Coke in hand. He has shoulder-length black hair and wore a tank top that showcased his tan and tattoos (including one on his forearm of the Bitcoin symbol).

Ms. Bestandig was among those who Mr. Taihuttu drew to Portugal.

Crypto-themed hats line the ceiling beams of Bam Bam, where customers are often drawn in by Mr. Taihuttu’s story.Credit…Rodrigo Cardoso for The New York Times

Originally from Germany, she said she and her family had been on the road since 2020. They had made enough from investing in Ether and other cryptocurrencies over the past few years to pay for their travels, she said.

Ether’s value has fallen about 60 percent in the past year, which Ms. Bestandig said was painful. She has cut costs on food and lodging but remains committed to cryptocurrency investing and said her family had enough money to continue their current lifestyle.

“We sold our house, our cars, our everything,” she said. “We’re trying to connect with other crypto-minded people.”

Almost everybody at Bam Bam had a story of being scammed or losing money in events like the collapse of Mt. Gox, a Tokyo-based virtual currency exchange that declared bankruptcy in 2014 after huge, unexplained losses of Bitcoin.

If cryptocurrency prices do not recover, “a lot of them will have to go back to work again,” Clinton Donnelly, an American tax lawyer specializing in cryptocurrencies, said of some of those gathered at Bam Bam.

Even so, Mr. Donnelly and other bar regulars said their belief in crypto remained unshaken.

Thomas Roessler, wearing a black Bitcoin shirt and drinking a beer “inspired by” the currency, said he had come with his wife and two young children to decide whether to move to Portugal from Germany. He first invested in Bitcoin in 2014 and, more recently, sold a small rental apartment in Germany to invest even more.

Mr. Roessler was concerned about the drop in crypto values but said he was convinced the market would rebound. Moving to Portugal could lower his taxes and give his family the chance to buy affordable property in a warm climate, he said. They had come to the bar to learn from others who had made the move.

“We have not met a lot of people who live this way,” Mr. Roessler said. Then he bought another round of drinks and paid for them with Bitcoin.