WAIMEA BAY, Hawaii — Last Monday afternoon, Tikanui Smith, a big-wave surfer from Tahiti, received the call he had been waiting for all his life.

The Eddie Aikau Big Wave Invitational would be happening, finally, in less than 48 hours. The event, perhaps the world’s most prestigious and mythical surfing competition, is open only to invitees and held only when the conditions are exactly right. The waves in Waimea Bay, on the North Shore of Oahu, must be consistently reaching heights exceeding 20 feet — that is wave faces of 40 feet, about the size of a four-story building. Those conditions are rare, and even rarer to prevail long enough to host a full day of competition.

“When I got the news, I stopped talking, stopped laughing and got super serious,” Smith said. “It’s on, the dream is on.”

The announcement, which arrived in a group message on Instagram, sent 40 invitees and 18 alternates scrambling. There were planes to catch, friends’ couches to claim, and specialized big-wave surfboards and safety vests to pack. The exclusive list included surfers from South Africa, Portugal, France, Chile, Brazil, California, and from just a few miles up the road along the Kamehameha Highway.

If Smith, 31, was going to make it, he would need to hustle. He lives on the island of Moorea, and would need to get on a boat to the island of Tahiti, then in a cab to Faa’a International Airport, and then on the final flight of the day to Los Angeles before boarding another flight to Honolulu. That was the 20-hour travel plan that would have him arriving in time for the competition.

Jody Grosmaire, his brother and coach, dropped everything to join him. The two gathered passports, the necessary Covid-19-related papers, and began making what Smith called a “maybe once in a lifetime” journey.

By the time they landed in Los Angeles, they were hit with a flurry of messages. The event had been called off. The forecast had shifted just enough to upend the world of big-wave surfing. The swell was no longer expected to be large enough for the Eddie. 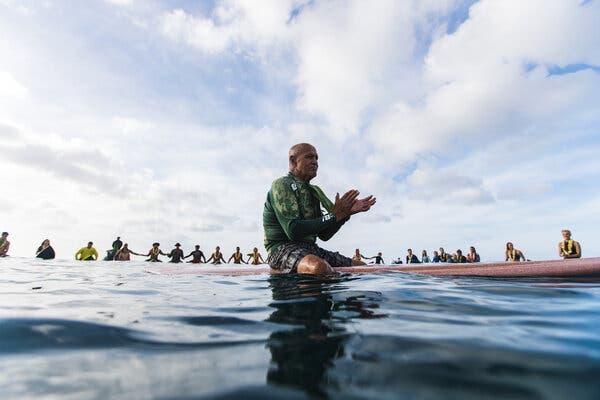 Clyde Aikau, Eddie’s brother, during a ceremony held to open the Eddie.Credit…Mike Ito

Culture is a big part of the opening ceremony for the Eddie. It is shared to demonstrate the importance of legacy and to pay respect to the ‘aina (land) and the kai (ocean) of Waimea Valley.Credit…Mike Ito

Big-wave surfers know nature can be fickle, and even a team of forecasters can’t predict an ever-evolving swell. But the electrifying rush of an event that is suddenly scheduled followed by the emotional crash of a cancellation is unique to the Eddie.

Like many big-wave surf competitions, the Eddie has a holding period that lasts for months. When weather models and buoy data detect a massive swell, big-wave surfers are told the contest is on, and a race to the waves begins. But most big-wave contests hold the event once it is called, even if conditions change after it has been greenlit.

The Eddie is distinct in its specificity, and described in a slogan: “The bay calls the day.” If it’s too windy, or the waves are too small or too inconsistent, the contest is not held, even if the world’s best surfers have all arrived and the beach is filled with spectators. On Feb. 10, 2016, the contest was called off the morning of the event thanks to a swell change. It was eventually held a few weeks later when a monster swell arrived, bringing waves topping 60 feet. 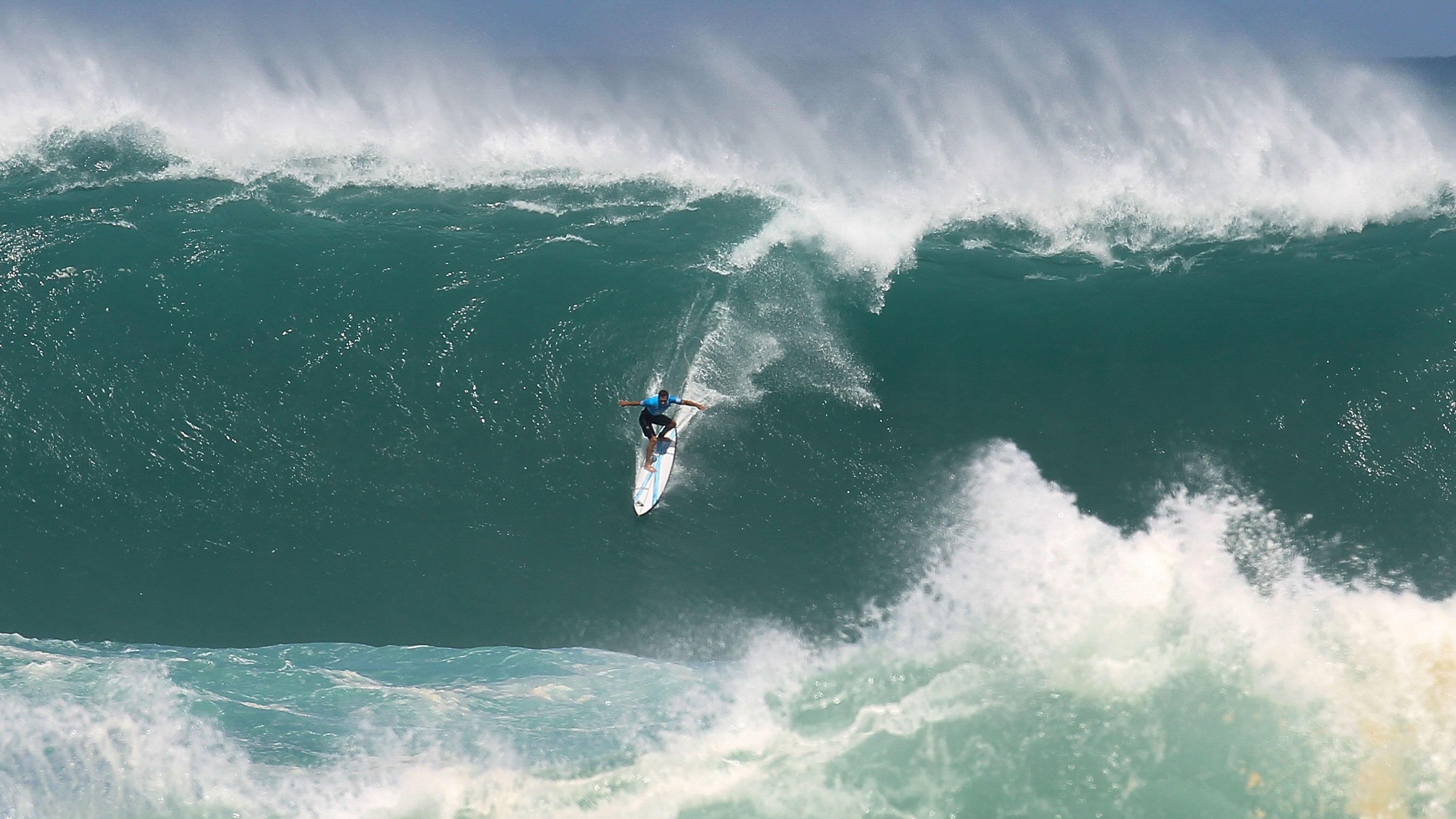 The event has been held since 1984 in honor of Eddie Aikau, a surfer from Hawaii and the first lifeguard on the North Shore of Oahu, a stretch of beaches that is home to some of the world’s most famed and dangerous beaches. Aikau saved more than 500 people as a lifeguard, and became known as a surfer who would brave massive waves that no one else would attempt.

Aikau was already larger than life when he joined the crew of a voyaging canoe that was retracing the ancient Polynesian migration route between Hawaii and Tahiti in 1978. Within hours of setting sail, the vessel, Hokulea, capsized. After hours of waiting for rescue, Aikau took his surfboard and paddled toward the Hawaiian island of Lanai for help. The rest of the crew was rescued by the U.S. Coast Guard hours later, and Aikau was never seen again.

The Eddie surf contest was founded six years later, and has been held only nine times since. Being included, and invited to the opening ceremony — whether or not the competition is held — is a sign of respect and recognition from the Aikau family.

Isabelle Leonhardt, a big-wave surfer from Colima, Mexico, said being invited to the competition is “the biggest honor in the world.” She was one of many surfers who traveled to Oahu for the Dec. 9 opening ceremony of the 2022-23 contest.

“In Hawaii, it stands for the history of big waves and surfers that come out to conquer these waves, just like Eddie,” Leonhardt, 39, said. “The way he lived and what he did for others makes it way more special, because I feel like in this event you can give purpose to surfing.”

Smith traveled to the opening ceremony too, just as he did when he was first invited in 2019. He was grinning as he greeted other big-wave surfers and hugged Clyde Aikau, who draped a lei around his neck. Those in attendance are offered traditional blessings and paddled out to Waimea Bay for a ceremony.

“The first time I paddled out, I had tears in my eyes,” Smith said, pointing to the goose bumps on his arms. “Maybe because I’m Tahitian, we’re Polynesian too, for me it means way more than the surf competition. When you paddle out you feel that Eddie is coming to us.”

The assembled surfers included the Italian professional Leonardo Fioravanti and John John Florence, the winner of the 2016 Eddie.Credit…Mike Ito
A crowd had gathered hoping to watch the Eddie but locals still got to see top surfers take to the water.Credit…Mike Ito

Early in the morning on Jan. 11, when invitees were expecting to be waiting for their heats, many still paddled out, to meet the monster swell that was rolling through the North Shore. Crowds met them at the beach — many locals had taken a sick day from work when the event was first announced — and cheered as surfers dropped into powerful waves.

There was Koa Rothman studying the sets of waves rolling in and Eli Olson coming in after “riding some fun ones.” Landon McNamara paddled out on a board that had an “Eddie Would Go” bumper sticker, a reminder, he said, “that keeps me going.” Bianca Valenti was giddy to be “reacquainted with the waves,” ones that only break this way once or twice a winter in a good year.

And there were Smith and Grosmaire, jubilant as they watched massive sets roll into the bay. When the event was canceled, they both decided to get on the next flight from Los Angeles to Honolulu.

The same instinct brought Leonhardt to the bay, even if she was an alternate on the women’s invitee list. Her journey began on Jan. 9 in the afternoon as she bounced between buses, taxis and flights from Colima to Guadalajara to Tijuana to San Diego to Honolulu.

One by one, they timed their entries into the dangerous shore break. And one by one, they returned to the sand, buzzing with the excitement that first brought them here.

The bay did not call the day after all. But the swell still arrived, so they did too.

Tags
From That Was Wave When