Interstate 710 in Los Angeles is, like the city itself, famous for its traffic. Freight trucks traveling between the city and the port of Long Beach, along with commuters, clog the highway. The trucks idle in the congestion, contributing to poor air quality in surrounding neighborhoods that are home to over one million people.

The proposed solution was the same one transportation officials across the country have used since the 1960s: Widen the highway. But while adding lanes can ease congestion initially, it can also encourage people to drive more. A few years after a highway is widened, research shows, traffic — and the greenhouse gas emissions that come along with it — often returns.

California’s Department of Transportation was, like many state transportation departments, established to build highways. Every year, states spend billions of dollars expanding highways while other solutions to congestion, like public transit and pedestrian projects, are usually handled by city transit authorities and receive less funding.

Over the next five years, states will receive $350 billion in federal dollars for highways through the infrastructure law enacted last year. While some have signaled a change in their approach to transportation spending — including following federal guidelines that encourage a “fix it first” approach before adding new highway miles — many still are pursuing multibillion dollar widening projects, including in Democratic-led states with ambitious climate goals. 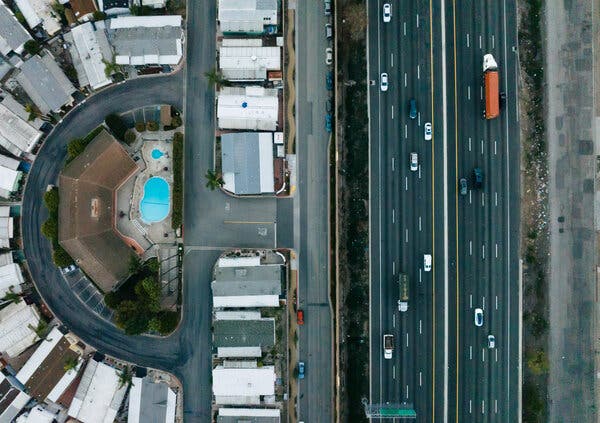 Traffic on I-710 passing by the Thunderbird Villa Mobile Home Park in South Gate, Calif.

The Biden administration has suggested that states should be more thoughtful in their solutions to congestion. Sometimes widening is necessary, Transportation Secretary Pete Buttigieg said, but other options for addressing traffic, like fixing existing roads or providing transit options, should be considered. “Connecting people more efficiently and affordably to where they need to go,” he said, “is a lot more complicated than just always having more concrete and asphalt out there.”

Some communities and government officials are pushing back on widening plans. In Los Angeles, this opposition had an impact. After $60 million was spent on design and planning over two decades, the Route 710 expansion was canceled last May.

It remains to be seen if the cancellation is the start of a trend or an outlier. Widening projects are still in the works for highways in Texas, Oregon and Maryland, to name a few. New York City is even considering re-widening the traffic-choked Brooklyn Queens Expressway.

Morning traffic passing through Compton on the I-710 in Los Angeles.

A Change in Approach to Congestion

The cancellation of the Route 710 expansion came after California learned the hard way about the principle of “induced demand.”

In 2015, a $1 billion project to widen a 10-mile stretch of Interstate 405 through Los Angeles was completed. For a period, “congestion was relieved,” said Tony Tavares, the director of Caltrans, California’s Department of Transportation.

But that relief did not last. Rush hour traffic soon rebounded, he said.

When a congested road is widened, travel times go down — at first. But then people change their behaviors. After hearing a highway is less busy, commuters might switch from transit to driving or change the route they take to work. Some may even choose to move farther away.

Traffic on I-710 in Long Beach, Calif., as Saturday morning soccer games were underway in Coolidge Park.
Isaac Morales, 18, used a sound barrier wall running along I-710 to practice soccer at Coolidge Park.

“It’s a pretty basic economic principle that if you reduce the price of a good then people will consume more of it,” Susan Handy, a professor of environmental science and policy at the University of California, Davis, said. “That’s essentially what we’re doing when we expand freeways.”

The concept of induced traffic has been around since the 1960s, but in a 2009 study, researchers confirmed what transportation experts had observed for years: In a metropolitan area, when road capacity increases by 1 percent, the number of cars on the road after a few years also increases by 1 percent.

For years, critics of the Route 710 plan had voiced concerns that the widened highway would lead to more greenhouse gas emissions and the bulldozing of the communities around it.

In late 2020, the E.P.A. ruled that the widening plan violated the federal Clean Air Act, and officials paused the project. Then last spring, Caltrans canceled the project altogether. Mr. Tavares said it was “probably the most significant” cancellation in the agency’s history.

Caltrans is considering alternatives to address traffic on the Interstate, including moving freight to a rail line.

“Caltrans in the past was very focused on dealing with congestion primarily,” Mr. Tavares said. “We have since pivoted, completely done a 180.”

State transportation agencies said they have shifted their focus to providing people with options other than driving and were planning to divert money to projects that would benefit communities surrounding Route 710. Options include improving air filtration in schools, providing better access to green spaces and investing in a zero-emissions truck program.

Yet there are still plans to widen other highways in the state. “One size does not fit all for transportation, and California is definitely not one size,” Mr. Tavares said.

Air Quality vs. the Economy

On an unseasonably warm day last November, dozens of northern New Jersey residents gathered in the shadow of a highway overpass in Jersey City, just across the Hudson River from New York. In a densely populated state with expansive transit infrastructure, many in attendance wondered why officials were planning to widen the highway.

“If we want to be a leading state, look at what Colorado is doing in ending their highway expansions. Look at Los Angeles,” Jimmy Lee, president of Safe Streets JC, said.

New Jersey transportation officials plan to reconstruct and add up to four lanes to sections of the New Jersey Turnpike leading to the Holland Tunnel. In addition to carrying traffic into Manhattan, the turnpike is, like Route 710 in Los Angeles, an artery heavily trafficked by freight trucks carrying goods between ports and warehouses in the area.

The project, which will cost an estimated $10.7 billion, includes rebuilding elevated roadways and the bridge over Newark Bay on the 66-year-old highway.

Traffic on the New Jersey Turnpike by Enos Jones Park in Jersey City.
Alexandra Charles, 7, and her brother Jonathan, 5, played at Enos Jones Park alongside the turnpike.

Diane Gutierrez-Scaccetti, commissioner of New Jersey’s transportation department, said the project was long overdue. A flurry of new residential buildings and commercial warehouses in the area has crowded the highway with more vehicles. The expansion is needed, she said, to make the highway safer and ensure the ports, critical pieces of New Jersey’s economy, remain viable.

“Congestion is not safe,” Ms. Gutierrez-Scaccetti said. “I don’t advocate widening roads just for the sake of widening.”

The project has the support of New Jersey’s governor, Philip D. Murphy, a Democrat who set ambitious climate goals for the state, and local labor leaders. Mark Longo, director of an organization representing heavy equipment operators, said the expansion is “the single most important road project for the economic future of New Jersey.”

Critics of the plan say the congestion can be addressed in other ways, including investing in public transit. Officials in Hoboken and Jersey City, which surround the highway and have some of the worst air quality in the country, have denounced the plan.

“There are other types of mobility that people value instead of just cars,” Jersey City Mayor Steven Fulop said.

The expansion of the Katy Freeway in Houston was initially hailed as a success. But within five years, peak hour travel times were longer than before the expansion.Credit…Alyssa Schukar for The New York Times

A Commitment to Expansion

For critics of widening projects, the prime example of induced demand is the Katy Freeway in Houston, one of the widest highways in the world with 26 lanes.

Immediately after Katy’s last expansion, in 2008, the project was hailed as a success. But within five years, peak hour travel times on the freeway were longer than before the expansion.

Matt Turner, an economics professor at Brown University and co-author of the 2009 study on congestion, said adding lanes is a fine solution if the goal is to get more cars on the road. But most highway expansion projects, including those in progress in Texas, cite reducing traffic as a primary goal.

“If you keep adding lanes because you want to reduce traffic congestion, you have to be really determined not to learn from history,” Dr. Turner said.

Cars on the I-45 in Houston passing the Historic Hollywood Cemetery.
Daleyza Almendarez, 3, and her father, Juan Serna, visited the grave of an uncle and aunt at the cemetery.

Officials from the Texas Department of Transportation said the Katy expansion provided the capacity needed to keep up with projected population growth in the Houston area.

“Expanding roads does not create more congestion,” transportation officials said in a statement. Rather, they said, it “helps to manage new travel demand.”

The Texas Constitution mandates that the majority of transportation funds go to improving the highway system. Over the next year, the state plans to spend about 86 percent of its budget on highway projects.

One of those is a $9 billion plan to reconstruct and widen a section of Interstate 45, which crosses paths with the Katy Freeway. Transportation officials said the project would improve safety, reduce congestion and address flooding along the roadway.

The plan for Route 45, Dr. Handy said, is another project being sold as congestion reduction. “But what’s especially troubling about that project is the destruction to the neighborhood that it will cause.”

The Texas transportation department estimates more than 1,000 people and 300 businesses in the surrounding neighborhoods, where most residents are Black and Hispanic, would be displaced by the expansion.

At the same time, officials at Houston’s public transportation agency are pulling together funding from bonds and federal grants for an additional way to address congestion and growth: 500 miles of improvements to public transit.