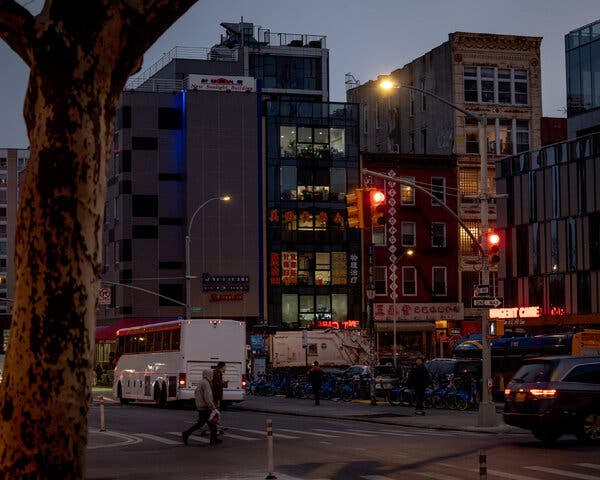 There are more than 100 such outfits around the world, unnerving diplomats and intelligence agents. State media accounts and public statements published in China identify sites in Japan, Italy, France, Britain, Germany, Hungary, the Czech Republic and other nations.

The Chinese Embassy in Washington played down the importance of the outposts, saying that they are staffed by volunteers who help Chinese nationals perform routine tasks.

But Chinese state news media accounts describe the centers conducting crime-solving or intelligence work, without collaborating with local authorities. Western officials and human rights groups see the outposts as a way for China to intimidate or keep tabs on Chinese nationals abroad, including dissidents and ethnic minorities.

Context: Irish, Canadian and Dutch officials have called for China to shut down police operations in their countries. The F.B.I. raid is the first known example of a seizure by the authorities of materials from one of the outposts.

Background: Police officers who work overseas typically declare themselves to the foreign government. China has made arrangements for joint patrols in places like Italy, which makes these off-the-books operations more curious.

Quotable: “It’s a long-arm power to show their own citizens inside China that their government is so strong,” said Chen Yen-ting, a Taiwan-based researcher. “We have the power to reach globally, and even if you go out, you’re still under our control.”

A Guangzhou street lined with closed factories in late December.Credit…Gilles Sabrié for The New York Times

Xi Jinping, China’s leader, is now extolling the economy he has long sought to rein in. He lauded China’s economy in the first minute of his New Year’s address, noting that he planned to reduce taxes and fees and otherwise “ease the burden on businesses.”

His remarks signal a shift in priorities. In recent years China abandoned its pro-business market overhaul to put the goals of the Communist Party above business interests, which included crackdowns on tech companies and curbs on borrowing by China’s property firms.

Growth is now at its slowest rate in decades, hampered by a property market in crisis, a lack of promising jobs for young people, consumer confidence shaken by years of rigid Covid policies and depleted local government coffers. Companies like Apple are looking with greater urgency to diversify outside of China.

What’s next: China’s central bank said this week that it was relaxing the oversight of technology companies, and the country has begun rolling back restrictions on heavy borrowing by property developers. Liu Kun, the finance minister, told state media that the country planned to spend heavily in 2023 to support an economic recovery.

In the U.S., inflation continued to slow on an annual basis in December, a welcome relief for American households.

President Yoon Suk Yeol of South Korea said that the country would weigh building its own nuclear weapons, or asking the U.S. to redeploy them on the Korean Peninsula, if North Korea’s nuclear threat worsens.

His comments marked the first time that a South Korean president officially mentioned arming the country with nuclear weapons since the U.S. removed its nuclear munitions from the South in 1991. Surveys in recent years have shown that a majority of South Koreans support such a move.

Yoon added that building nuclear weapons was not yet an official policy, and that South Korea would for now strengthen its alliance with the U.S. to discourage the North’s nuclear acceleration.

Context: North Korea has vowed to expand its nuclear arsenal, and in 2022 the country tested more missiles than any previous year. The provocations have led some members of Yoon’s conservative People Power Party to call for Seoul to reconsider a nuclear option.

History: South Korea embarked on a covert nuclear weapons program in the 1970s, but abandoned it after the U.S. promised to keep the South under its nuclear umbrella. South Korea is a signatory of the Nuclear Nonproliferation Treaty, which bans it from seeking nuclear weapons.

Face filters and selfie apps like Lensa AI scan images of your face, then generate portraits in a variety of artistic styles. The result is a version of your visage that can’t be captured in a snapshot — and that stimulates limitless interest.

The results can be “ugly and strange,” writes Sophie Haigney. But, she adds, “I can’t help staring at Lensa’s hundred semi-real versions of my face.”

Jeff Beck, a member of the Yardbirds and leader of his own bands, was one of the most skilled, admired and influential guitarists in rock history. Here are 10 essential songs.

Rehman Rahi was a celebrated poet who was devoted to preserving the Kashmiri language and credited with restoring it to literary prominence.

Want to stroll among the Taisho-era buildings in Morioka, Japan? Or wander through the stone circles and standing slabs of Kilmartin Glen, Scotland? Or bottle-feed a joey on Australia’s Kangaroo Island?

All three destinations made the top 10 of the Times Travel section’s 52 places to go in 2023. Also recommended to people hungry for adventure are places like Flores, Indonesia; Tassili n’Ajjer, Algeria; and New Haven, Conn.

Even medieval monks struggled with their attention spans, Jaimie Kreiner shows in “The Wandering Mind.”

In Netflix’s six-episode adaptation of Elena Ferrante’s “The Lying Life of Adults,” formidable female characters navigate the complexities of class in Naples.

Wirecutter explains how to choose the best running shoes.

That’s it for Friday’s briefing. Have a great weekend. — Dan

P.S. Rebecca Blumenstein, a Deputy Managing Editor and newsroom leader at The Times, is leaving to become president of editorial for NBC News.

“The Daily” is about flooding in California.

You can reach Dan and the team at briefing@nytimes.com.

Tags
China President Said That With