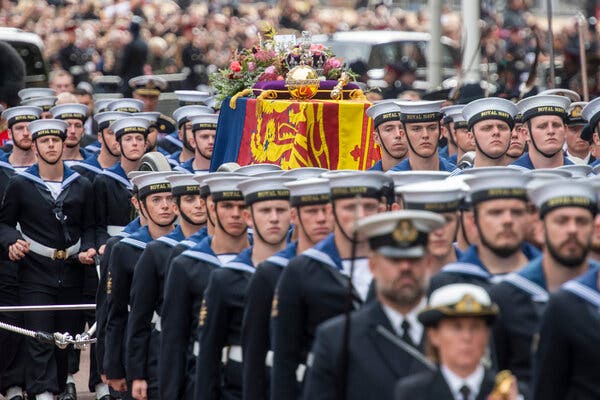 Britain bids farewell to its queen

Queen Elizabeth II was laid to rest yesterday after a majestic state funeral that drew millions of viewers across the country and was accessible to billions around the world. It was the culmination of 10 days of mourning since the queen’s death on Sept. 8 in Scotland — a highly choreographed series of rituals that came amid a deepening economic crisis and a fraught political transition in Britain.

More than 100 world leaders, including President Biden and Emperor Naruhito of Japan, converged on London, the largest such gathering since the funeral of Nelson Mandela in 2013 in South Africa. Tens of thousands of people lined the cortege’s route past the city’s landmarks.

The service was designed to showcase Britain’s imperial history, its constitutional democracy and its Commonwealth. The carriage that bore the queen’s coffin was the same one used during Queen Victoria’s funeral in 1901. Both Britain’s new prime minister, Liz Truss, and the secretary general of the Commonwealth, Patricia Scotland, read from the Bible.

Context: Britain will now return to wrestling with the gravest economic crisis in a generation. Fears about the country’s public finances have driven the pound to its lowest levels against the dollar since 1985. The survival of the monarchy’s far-flung realm is in question, as Caribbean countries debate whether to cast off the king as their head of state.

Photos: See images from Elizabeth’s life and a visual dictionary of the symbols of her reign.

Reflection: The queen’s coronation and her funeral have become the bookends of a generation, Alan Cowell, a contributor based in London, writes in an essay.

The South Ukraine Nuclear Power Plant in Yuzhnoukrainsk, Ukraine, about 70 miles north of the city of Mykolaiv, in 2015.Credit…Olga Yakimovich/Reuters

A Russian missile exploded less than 900 feet from the reactors of the South Ukraine Nuclear Power Plant, Ukrainian officials said. Unlike the Zaporizhzhia plant, which sits in an active battlefield, the South Ukraine site is far from the frontline fighting, illustrating Russia’s long reach.

Security camera footage showed a huge fireball lighting up the night sky over the site, and the shock wave blew out more than 100 windows at the South Ukraine complex, Ukraine’s second-biggest nuclear plant. There was no damage to essential safety equipment there, Ukraine’s national nuclear energy company said.

The source of the explosion could not be independently confirmed, but the strike fit Russia’s long-established pattern of attacking critical Ukrainian infrastructure, even when such assaults pose a serious threat to civilians. Russia has battered the energy systems that Ukrainian civilians rely on with artillery and occupied the Zaporizhzhia plant for months.

The 77th session of the U.N. General Assembly, the largest annual gathering of world leaders, began yesterday in New York City. Here’s what to expect this week.

The meeting is the first in-person session in three years, after more than two years of pandemic disruptions. But the mood is likely to be a somber one. Leaders will address the war in Ukraine, mounting food and energy crises and concerns over climate disruptions, such as the floods in Pakistan.

Tensions are expected to be high between Russia, the U.S. and European countries over the war in Ukraine — and between China and the U.S. over Taiwan and trade. Vladimir Putin and Xi Jinping, the leaders of Russia and China, are not expected to attend. “The General Assembly is meeting at a time of great peril,” António Guterres, the U.N. secretary general, said last week.

Analysis: “This is the first General Assembly of a fundamentally divided world,” said Richard Gowan, the U.N. director at International Crisis Group, a research group based in Brussels. “We have spent six months with everyone battering each other. The gloves are off.”

What Else Is Happening

Thirty-four years ago, a group of men helped save the writer A.J. Jacobs and his sister after a kayaking mishap on a cold, dark night in Alaska. These days, he writes, he tells his sons the story to remind them that, “despite much evidence to the contrary, humans have the capacity to be amazingly kind.”

Bruno Fernandes exclusive: The Manchester United star explains how Erik ten Hag is changing things at Old Trafford. He talks Rangnick, Ronaldo — and that “Encanto” song, in a wide-ranging interview.

Todd Boehly’s multiclub plan: Chelsea’s new U.S. owner has not been involved in soccer long, but these are the clubs he could buy in Portugal, Belgium and Brazil.

From Las Vegas to Bournemouth: Bill Foley, the majority owner of the N.H.L. franchise the Golden Knights, is poised to branch out into soccer. He has his sights set on a Premier League club — why?

How does a group of people achieve a consensus? And what happens to their brains after such discussions? A new study, recently published online but not yet peer-reviewed, showed that a robust conversation resulting in consensus synchronizes the talkers’ brains — and not only when thinking about the topic that was discussed.

The study focused on participants’ responses to critically acclaimed movies. But there’s evidence that a similar approach — a respectful, engaged conversation — can make a difference to people’s points of view in politics, too.

Political scientists have long argued for the value of discussion. Put a diverse group of people in a room, they say, and they’re likely to mute their harshest views and wrestle more deeply with rebuttals. They become more informed, even more empathetic.

In 2019, 526 voters from across the U.S. came together for a weekend at a resort outside Dallas, where they were asked to share their opinions on hot-button issues like immigration or health care. Though many said they had not changed their minds, pre- and post-conference surveys suggested that people on both the left and the right appeared to edge toward the center.

Three siblings reunite in Amanda Svensson’s turbulent novel “A System So Magnificent It Is Blinding.”

And here are today’s Wordle and the Spelling Bee.

P.S. The executive editor of The Times, Joseph Kahn, wrote about why The Times is focusing on the challenges facing democracy in the U.S. and around the world.

The latest episode of “The Daily” is on the future of the U.K. after Queen Elizabeth’s death.

How Is Everyone Making Those A.I. Selfies?

Is Aaron Judge the Next Yankees Captain?